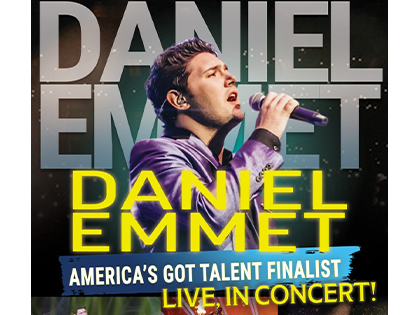 EVENT POSTPONED
As Covid numbers continue to rise, and out of an abundance of caution, we have decided to reschedule this indoor event for later in the season. New dates will be posted here when they are finalized.

KeyBank presents Rochester native Daniel Emmet, a finalist on Season 13 of NBC’s America’s Got Talent, heading back to the JCC Hart Theater for two performances:

Run Time: About 75 minutes, no intermission

Proof of Covid-19 vaccination or a negative test (within 72 hours of event) will be required upon entry.

Leading the live band for these exclusive performances will be Daniel’s acclaimed musical director, Jerry Williams. The intimate setting of the JCC Hart Theater is the perfect venue to experience this extraordinary, powerhouse singer up close and personal. The evening promises a “feast for the ears”, as Emmet takes you on a musical journey that crosses the genres, with re-imagined hits from the catalogues of artists such as Whitney Houston, Aerosmith, The Beatles, Elvis, Josh Groban, Andrea Bocelli, Daniel’s chart topping originals, and so much more!

Emmet is best known for taking on the “impossible challenge,” levied by Simon Cowell – to learn a new song in Italian, in one hour, and then perform it live on national television. The multi-lingual, multi-genre Emmet delivered a spellbinding moment during that first appearance on America’s Got Talent, as in all of Emmet’s performances that lead him into the finals, brought the judges and audiences to their feet in fervent applause.

Emmet’s career has skyrocketed on a meteoric trajectory since appearing on America’s Got Talent. He is a Las Vegas headline performer, debuting his own show, “All That I Am,” for an exclusive run at Caesars Palace in Las Vegas, guest starring on numerous nationally broadcast TV shows, appeared in concert with prestigious orchestras round the country, and he just released his latest original song on June 25th, “True Reflection”, which debuted at #1 on the iTunes classical chart. He has toured with superstar Marie Osmond, who describes him as “a star on the rise with a once in a generation voice.” Jerry Williams, concurred. “Daniel has all the qualities of superstardom,” Williams said, “the talent, the discipline and the hidden factor that completely sets him apart.” Added Williams, “In a media world saturated with choices, Daniel is in a league of his own: the top stratosphere.” Daniel’s upcoming events include; a guest appearance with renowned guitarist Pavlo for a brand new PBS Special, filming in Santorini, Greece; an appearance performing an original song in an upcoming TV movie; special performance for Battle for Vegas – Las Vegas Raiders vs Vegas Golden Knights; guest starring with Marie Osmond at the Kenley Amphitheater; headlining the 25th Annual Serenades of Life at Reynolds Hall at the Smith Center in Las Vegas; and headlining a symphonic concert with the Symphony of Beaumont, TX, among others.